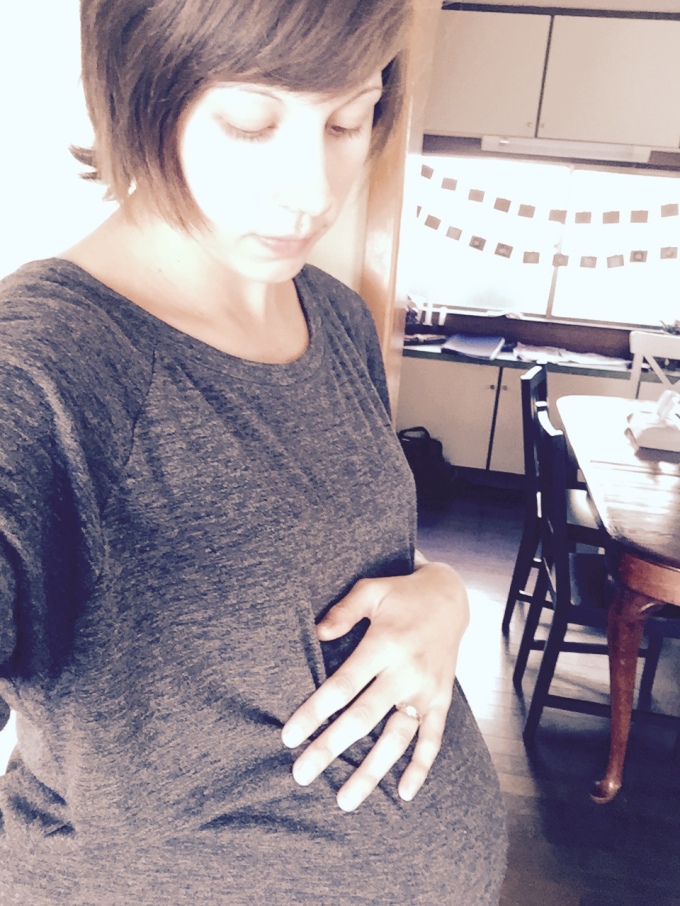 I can’t stop thinking about birth. I suppose it’s normal for where I am right now: four days past my due date, the magic day in all previous pregnancies during which I met my long-awaited babies.

Jones was due on March 16th, and my doc induced my 4cm-dilated-for-weeks body by breaking my waters in the hospital at 1p on March 20th. Contractions began at 3p, skipping over early labor straight in the hard work of active labor. I was shocked, assuming that things would begin slowly and I would have time to adjust to the rhythm of labor before intense concentration would be required. It wasn’t so. I remember wishing the nurses would leave me alone and quit coming into the room to ask me questions. I had the urge to push around 9:00p, but because I hadn’t hit that “magic 10” mark, they wouldn’t let me, so I labored for 45 minutes, trying to keep a baby in that wanted to come out. When I did finally get to 10cm at 9:45p, I had no urge to push but they told me I needed to because I was almost done. I couldn’t get the hang of it, and Jones didn’t make his entrance into the world until 11:45p. I will NEVER forget those two hours of pushing, nor the feelings of being messed with or told that textbook lessons should overrule my bodily instincts. I knew I didn’t want to do it that way again. Still, it was a relatively short labor for a first-time mom, active labor to birth: 8 hours.

Ezra was due on October 18, and I woke up on the 22nd with some mild contractions and (TMI, boys) the tell-tale bloody show. Labor didn’t seem much like labor, though. Contractions were uncomfortable, but very manageable, and they puttered out around 3p, despite the walking and activeness I’d kept up throughout the day. I was exhausted, so I napped. No contractions for four hours, which meant discouragement and tears. My midwife told me to come by, so we said we’d stop after we ate dinner. Once we left the house around 7p to eat, contractions started up again, about the same mildness as before. We stopped at 8p, encouraged to maybe be in labor again, and the midwife said we could come stay if it would make us more comfortable. We went home, left our little dude with a friend, and by the time we were back at her house and hour later, I was in that active-labor zone of don’t-touch-me-don’t-talk-to-me-this-is-serious. Ezra was born at 11:45p that night, after an intense 2-plus hours of amazon-woman groans and cries. Luckily, I only had to push 30 minutes with this stocky little guy, and I was so encouraged that my midwife cared more about how I felt and how I sounded in birth, rather than centimeters, dilation, blah blah blah. I think she only checked me once, and when I felt like I had to push, she said, “Go ahead” (in Japanese, of course — she did attempt some hearty “Good-o Job-u” in English, though). Active labor to birth: 2 hours and 45 minutes.

Harper was due on June 6, and on the night of June 9th, I went to bed around 10 but was kept awake with mild, annoying contractions. By midnight, though, I was able to sleep through them, and even slept in til around 9a, when a crazy strong contraction got me up and out of bed quickly. From that point, I would have one contraction so strong I felt I needed to leave for the midwife’s house NOW, then have about three that were mild enough that they made me think labor was probably puttering out again. We left the house around 10:30 for an iced latte and a stop at the park close to my midwife’s — I wanted to pass time/be in nature/see normal people doing normal things. We arrived at her house at 11:45a, and I labored by the window, never getting past the urge to be up and moving around with this birth (eventually, she would be born while I was standing, even). Around 1p, I started to get hungry and asked for an onigiri (rice ball), but one contraction later, I told Bryan to tell her to forget the onigiri, the baby was coming NOW. My midwife hurried up the stairs, listened to the sounds I was making, and prepped the room — no need to check me. After a few pushes, she told me baby’s head would come out with the next contraction, and I thought she was lying. I actually said, “You’re lying,” which everyone else in the room found amusing. Then I asked why they were all laughing, this was hard — but sure enough, my first baby girl fully entered the world just minutes later. Active labor to birth: 4 hours, 15 minutes.

These stories make it seem like labor is short for me, when in fact, I feel like labor is a weeks-long process for my body, with many starts-and-stops before things really kick into gear. With all my pregnancies, including this one, I’ve had labor symptoms from week 37, and yet I have gone past my due date each time. And these are not “false alarms” in the sense that they are not real contractions and I just can’t tell the difference, so I think labor is beginning. These are real, and they stick around for a few hours and get closer together, stronger, and longer — and then, they just reverse and begin to get weaker and shorter and further apart until they are no more.* Every time, my body has done this, so I’ve just realized this is how I will labor. In the end, there is the benefit of a shorter active labor, but at the emotional cost of wondering every few days if your contractions will actually stick around, or die off again, for weeks. You’d think my body would’ve taught my mind a lesson by now, but I still kept up hope this time around that I wouldn’t be looking toward Christmas, wondering if I’d be home to celebrate or not. But today, I am. Today, I’m letting go — once again — of expectations I didn’t know I had, in exchange for a new reality and the maybes of the coming days and weeks. I had today in my mind — four days past my due date — as the day I will probably not pass, but it looks as if I will. I want to reset again, and look for things to be thankful for in this, another few days or weeks of being pregnant.

*This experience, in medical terms, is called ‘prodromal labor.’ There are some excellent online resources that can help a mother explore this topic in depth, in order to understand what is happening to her body. Some health care professionals will see these symptoms and assume that labor will not continue on it’s own, thus beginning medical interventions such as pitocin, breaking waters, etc, that could eventually end in unwanted results. If this is you, and you are wanting a natural birth, reading up on these symptoms is great idea! This article is a good place to start.